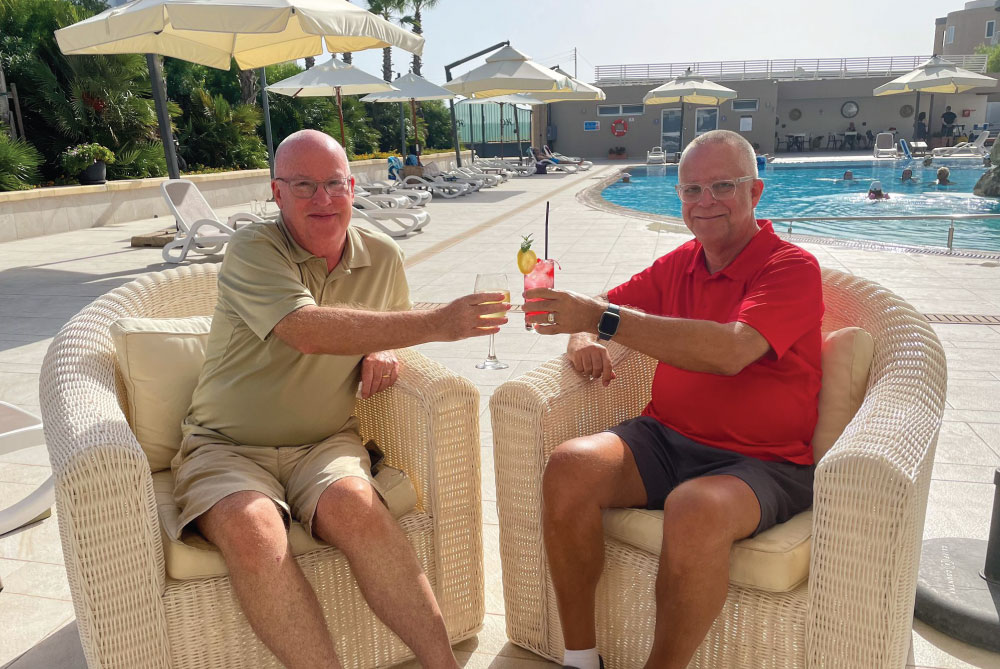 In honour of Pride Week 2022, we sat down with Hilltop Gardens resident Patrick Kelly, who has been with us since January this year, and his husband Colin Boakes who is in the process of joining him soon. The couple, both in their late 60s, moved to Malta from London in 2018 due to Brexit. They have been together for over 37 years after being introduced to one another by a mutual friend. They took on a civil partnership once it was made legal for same-sex couples in the UK in 2005, however quickly converted it to a marriage that was backdated to 1985, making the couple officially married.

Prior to entering Hilltop Gardens, the two were full-time nurses who saw the start of the AIDS epidemic back in the early 80s. Colin recalls his time working in the Middlesex hospital and seeing young men who were admitted with AIDS during a time when no one could understand what it was. “Nobody knew what was happening. You’d start thinking as a gay person, am I going to get this? Because no one knew what it was or how you got it. It was terrible.”

Patrick and Colin have been openly gay for as far as they could remember. Both claim that coming out was easier than they thought it was going to be. Their parents were believed to have a sixth sense for these things as they were not surprised at all. Patrick was fortunate enough to have an older sibling come out before him, which gave him the support he needed to also share the news with his family.

While the two claim that it seems to be easier for young people now, it still depends on the circumstances one is brought up in. Patrick mentions how being gay is now “less ghettoised”, with much fewer gay bars and gay nightclubs around. The two agree that everything has become a lot more open, which they believe provides more equality in the world.

Patrick and Colin go on to state that younger generations seem to have many other problems, whether gay or not, and mentioned current issues such as getting onto the property ladder, increasing cost of living, competition in the job market, and even social media issues that have arisen in recent years.

While the two had no children of their own, they wished to help young people who had not been taken care of. It was through the Albert Kenedy Trust, an LGBTQ+ youth homelessness charity working with young people who struggle with their housing situation, that the couple was given the opportunity to help where they could. They opened their home to several youngsters throughout their time living in London, and while the process to foster was not an easy one, they got to see a few young men grow up and become quite successful despite having troubling childhoods.

The two recall one young man coming from a Turkish family, who was kicked out of his home because of his sexual orientation. “He was a very resourceful young lad, very intelligent. He was going to college, and he was working and then he did eventually reconcile with his parents. Perhaps him stepping away from the situation gave both sides time to think about it.”

Patrick and Colin go on to explain that there’s a certain amount of luck to coming out. One may be lucky enough to have parents that don’t mind as long as you’re happy and healthy, then there are others who just cannot accept it. While it must be very difficult, the two both agree that “it is something you have to do at some point. You can’t live a lie”.

When asked how Malta has treated them as an openly gay couple since moving here in 2018, the two had nothing but positive remarks to add, “I think Malta is quite a forward-thinking country in many ways, although it’s Catholic, you have same-sex marriage here and I think same-sex couples have been accepted for quite a while.” They also claim to have been treated well by their previous neighbours in Mellieha, with whom they stay in touch quite regularly as they become accustomed to life in the village.

Colin went on to add that the couple “were welcomed here at Hilltop particularly. Maltese are very lovely people.”

The two are now future-proofing themselves. “We have no children so there is no one to look after us when we’re very old”, the two added, “I think we’ll see more gay people coming to places like Hilltop. We look forward to welcoming them here alongside us!”

We use cookies to give you the best, most relevant experience. Using this website means you're Ok with this. You can change your preference at any time from the Privacy Policy page. Read more